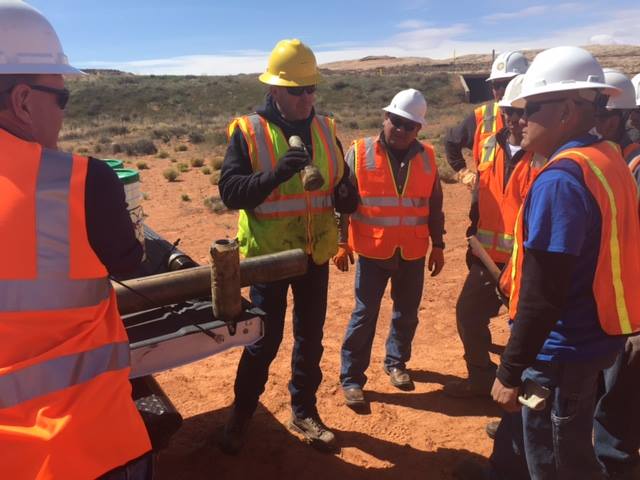 Rock Is No Match for a Small Drill and Hammer – ForConstructionPros.com

Thanks to the right mix of equipment, GSW Contracting has built its business boring through rock.

Any contractor who has ever encountered a rock formation during an installation project knows all too well that boring through rock is a time-consuming and often costly process, especially if the right equipment isn’t being used. Plus, every rock formation is different, often requiring a unique approach to each formation. This often involves experimenting with different horizontal directional drill rigs, attachments, mud mixtures, etc.

But Gregg Wilder and his team of installation experts at GSW Contracting, based in Canton, GA, have discovered an approach that has helped alleviate much of the need for such experimentation. Started by Wilder nearly a decade ago, the firm is now widely recognized for its ability to drill through the toughest materials.

“As a lot of utilities have grown, [drilling through rock] is one of the last areas where installations are now possible. Oftentimes, there is nowhere else to go,” Wilder points out. “GSW has the specialization in drilling through rock formations that allows us to bid and compete for more jobs. This history and our track record of successes have really made a difference. We’ve grown steadily as a result and it’s all been by word of mouth.”

Conventional wisdom says that boring through rock requires a larger drill with more power. However, according to Wilder, it’s more about the attachment, the methodology and the approach. He cites a recent telecom installation project in Pennsylvania.

After rock formations had defeated previous invasions initiated by another contractor using a larger drill and experimenting with various drill bits, project owner Infrasource turned to GSW Contracting for assistance.

“We got involved in the early phase of a telecom installation job just as the previous contractor had progressed into an area of solid rock,” Wilder recalls. “We were one of the first contractors to adopt the hammer attachment for boring through rock, especially for smaller-size drills, and used the Vermeer D20x22 Series II model drill with a Pioneer One hammer. We were able to set up a lot smaller, shorter shots. And because of the size drill we were running and the size hammer, we could operate with a much smaller setup.

“The ability to use a smaller setup with a smaller drill and not needing to swap out attachments all the time really works to your advantage,” he continues, “especially in crowded urban areas or spaces already clogged with lines. That’s why we went with a smaller setup on this job. This was one of those instances where a larger drill just couldn’t have been set up and we were able to complete the job using smaller equipment.”

Hammering away at rock

The fiber project involved installing a 3 1/2-in. conduit through roughly 5,000 feet of solid rock composed primarily of limestone, which in some places exceeded 30,000 psi.

“It was some pretty hard stuff,” Wilder says, “and that is where the hammer systems set themselves apart. Some of the formations were more difficult than others due to collapsing rock, but the instincts and experience of our crew using some method adoptions proved successful. We’d been there before.”

Wilder’s cleanup crew employed repeated, hard-hitting assaults ranging from 200 to 500 ft. per shot. “We were drilling on the average of 150 ft. a day,” Wilder says. “There were times when we had to put on a reamer and pre-ream some of the bores, and this slowed our production rates accordingly. But in conditions where we could use the hammer exclusively, we were drilling close to 40 ft. an hour. That’s not too shabby considering it was solid rock that we were boring through.”

In instances where backreaming was required, Wilder’s crew used a 6-in. reamer to secure unstable formations resulting from occasional mini cave-ins.

Overall, the Pennsylvania telecom installation spanned some 400 miles from east to west. Wilder contends the overall success of the project can be attributed to his company’s experience and knowledge navigating rock. “You don’t need a lot of muscle to win the David vs. Goliath rock battle,” he says. “You just have to be smarter than Goliath. It’s not about muscle; it’s about strategy. GSW will gladly accept that challenge any day.”

Since you can't control every bore response in the rock formations you encounter, it can sometimes result in an unstable bore wall. While unpreventable, these situations still affect overall productivity — something Gregg Wilder, GSW Contracting, encourages other contractors to recognize at the outset of a project.

“Rock varies greatly by geography,” he comments. “In the southeastern part of the country, the rock is much more solid. You can bore a hole and use much less water, so access to a water source isn’t as much of a factor. In other areas of the U.S., rock formations vary a great deal, so access to water becomes more of an issue because more will be needed to secure a bore.”

It's important to utilize operator experience and the capabilities of the drill to their best advantage. "But recognize that when drilling through rock, some things are simply unavoidable,” Wilder emphasizes. “The key is to be aware of the variables up front and account for them when preparing the bore approach and, most importantly, the bid. Account for what cannot be controlled and tackle the rest in the most efficient way.”

After Hours Parts: Call or Text

Follow us on social media to get the latest Pioneer One news.